Our next Artemis and Apollo Meeting will be held on the 24th March at The Porsche Centre, Silverstone in Northamptonshire.

Our members are looking forward to a very special experience that will include experiencing off-roading in 4X4¹s as well as skid pan and closed track driving in the range of sports cars used at the centre . This experience will not be one that any member with a speed aversion will not enjoy . The instructors involved in the day are professional drivers of a very high standard .

Members will then enjoy a three course lunch followed by an Executive Mentoring session in the fantastic facilities at the centre in the afternoon.

Our Director for Sales and Marketing, Oliver Payne was invited to attend a function at Porsche Swindon last night and had the pleasure of meeting Derek Bell MBE is a British racing driver who was extremely successful in sportscar racing, winning the Le Mans 24 hours five times, the Daytona 24 three times and the World Sportscar Championship twice. He also raced in Formula One for the Ferrari, Wheatcroft, McLaren, Surtees and Tecno teams. He has been described by fellow racer Hans-Joachim Stuck as one of the most liked drivers of his generation 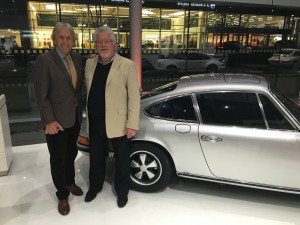 We look forward to welcoming our existing members and guests on the 24th March.